A few months back Christian sent in a video that we had taken of the girls releasing their butterflies. Natalie had received a butterfly kit from her Aunt Emily for her birthday.  Once the butterflies hatched from their cocoons we decided to film the release and much to our surprise, one seemed attached to Natalie.

AFV contacted Christian a few months ago asking us to fill out some paper work because there was a possibility that they might use the video clip in the upcoming new season 27.   They told Christian they would contact us once they knew if the clip would be used.

Just a week before the airing they contacted Christian asking for his shirt size.  When your video is used they send you an official AFV t-shirt. It was very exciting to watch live and we had no idea how much of the video would actually be shown.  To our surprise the entire video was shown.  See the link below to watch Episode 4 Season 27 from October 30th.  Natalie’s clip begins 4:22 into the show.  She also appears again at the very end!

AFV on ABC has always been a family favorite!! 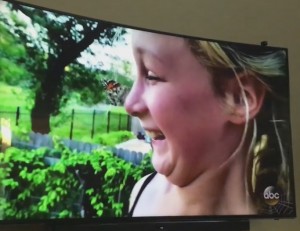 We are slowly moving this along. Please stay tuned.

© 2016 AmyLikesIt.com I All Rights Reserved